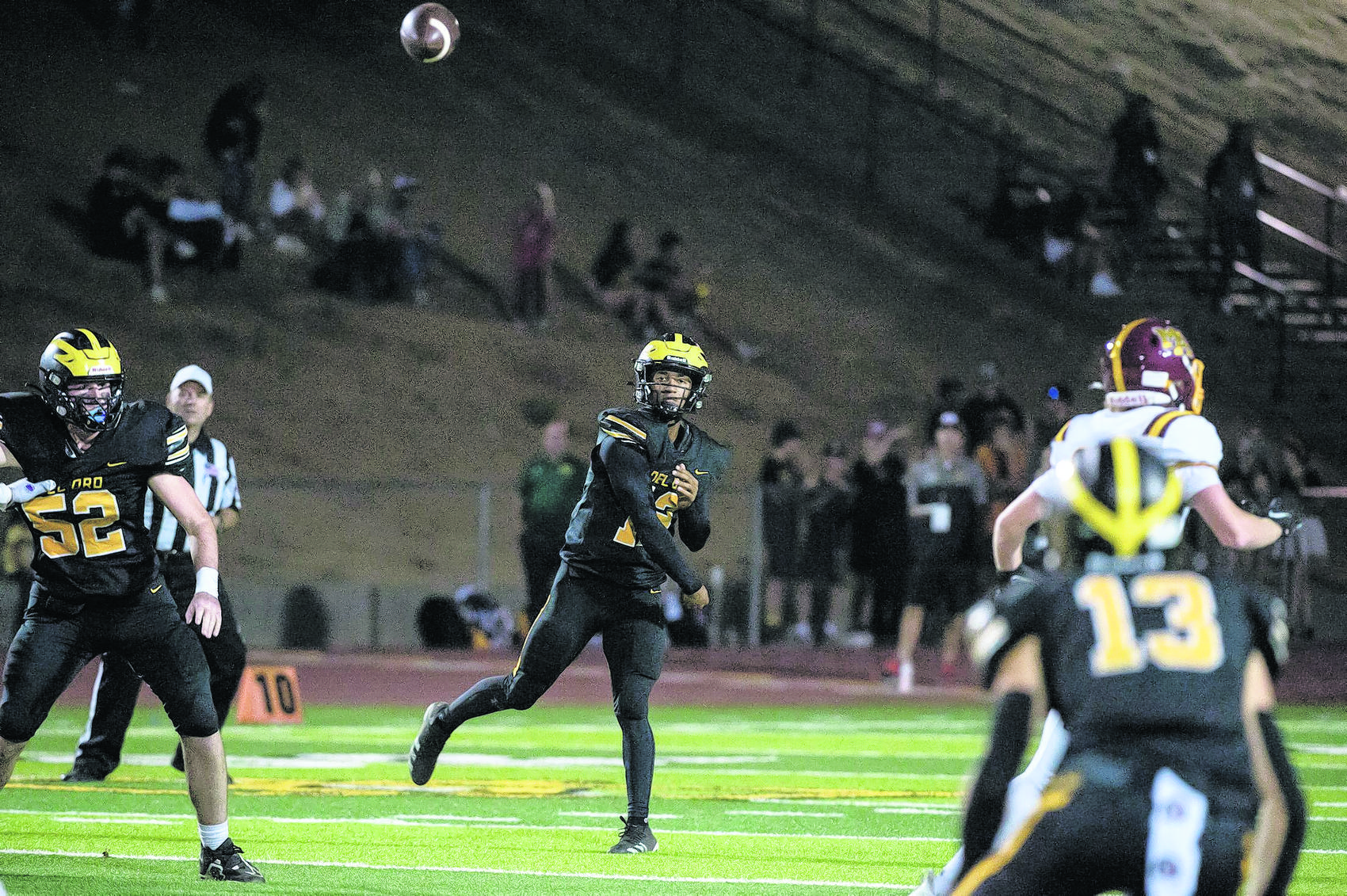 Del Oro quarterback Caden Pinnick (12) throws the ball to Tommy Poe (13) for a first down during the second quarter in the game Sept. 16 at Del Oro High School in Loomis.

It’s a fun position to play, but it’s not the easiest: Quarterback.

You’re under intense pressure. The defense wants to knock your block off. The offense and the coaches – and those in the stands – expect poise under pressure, cool under fire. Easier said than done.

“There’s so much involved in playing the position,” Folsom High School coach Paul Doherty said. “It can be overwhelming for kids. There’s no other position in sports where an individual’s success manifests through the entire organization, and you have to navigate a stressful environment in a game. You need time and you need space. It’s the toughest position in sports.”

Doherty coordinates the NorCal Passing Academy, which works with scores of quarterbacks from around the region. It’s a year-round process of coaches working on player mechanics, on reads, on the mental approach to such a challenging, yet rewarding position. Quarterbacks in these sessions talk to each other, check over their film, their footwork, their drops, their reads, their progressions.

One doesn’t have to be 6-foot-5 with an all-world arm to be a leader or succeed. One has to have the desire to improve, Doherty said, and the willingness to understand and accept that failure is part of the game. There will be pass-protection breakdowns. There will be dropped passes or interceptions, or a blitzing safety in your grill.

It’s how you deal with it and roll with it that matters most. Improvement is paramount. Austin Mack of Folsom looks the part of the national recruit. He is 6-foot-6 and he’s the first to admit he was a deer caught in the headlights in games last season. Not now. He has come of age as a junior with prolific results for the top-ranked team in the section.

“Sometimes you have to go through adversity and struggles and you grow,” Doherty said. “Austin Mack benefited from having to struggle. It was the best thing for him and our program.”

And more than ever, there are skilled freshman quarterbacks mature beyond their years thrown into the fire of competition because they have been deemed ready for it. Those include Deakon Holden of Christian Brothers, Ryder Trantham of Capital Christian and Walter Lewis of Highlands. Each has shown glimpses of promise.

Doherty was a quarterback growing up until he wasn’t. He played the position in high school in the Bay Area and was switched to defensive back when he played at Menlo College. Theme: Do what you can.

“I had no ability at quarterback, but I was highly motivated and wanted to get better, and that’s the key to this position,” Doherty said.

Here’s a list of the top 20 quarterbacks in the Sacramento area. Not all of them have worked with the coaches at NorCal Passing Academy, and most of them have not generated much college recruiting interest because that’s the biggest numbers game of them all: Tens of thousands of passers across the country and only so many scholarships to grab. But all are leading teams expecting to reach the Sac-Joaquin Section playoffs.

Never mind the size. Good luck containing him as D.B. has passed and rushed for nearly 1,000 yards and 14 touchdowns in just three games for the upstart Panthers. .

The most crucial position in the wing-T is the quarterback, and the Hillmen are 4-0 with J.C. tossing the game-winner to beat Vista del Lago.

A team captain, Dewar feels the game and accepts sharing the role with talented C.J. Lee for the No. 5 Marauders, making him the ideal teammate.

In a word: athlete. Fenika has accounted for eight touchdowns for the 5-0 Hawks with perhaps their greatest team since opening in 2009.

Fast, dynamic, fun and prolific, Fragata leads the section with 1,678 yards and 22 touchdowns for the 3-1 Warriors.

A prime example of waiting his turn and seizing on it, Hargis has passed for 911 yards and seven touchdowns for the playoff-regular Wildcats.

Hurts defenses with his arm, mind and legs and has the defending Golden Empire League champions off to a 3-2 start by accounting for nine scores.

Poised, skilled and has a deep ball target in Matt Long, J.K. has passed for 1,1211 and 15 touchdowns in facing monstrous competition.

A steady presence in completing 67% of his passes, Kruse is in cruise control for the first-time varsity program.

Strong, sturdy and accurate in completing nearly 80% of his passes for a run-heavy team, Long is fully capable of throwing long.

Perhaps the top QB prospect in the state next fall with scores of major scholarship offers; 955 yards passing, 12 scores and no interceptions in 2022.

Keeps his team competitive because he is, and he plays hurt and inspired. All grit.

From a long line of terrific athletes in his family, here comes the next one. C.P. torched Menlo-Atherton for five total touchdowns for the 5-0 Golden Eagles.

Came off the bench last season after an injury to starter Kenny Lueth and helped power a 12-1 season, and he still calmly leads the charge for the 3-1 Thunder.

Goes by “Touchdown Jesus” by his teammates and has 790 yards passing, seven touchdowns, no interceptions and a 4-0 record for the No. 4 Trojans.

Yes, the Titans have a star runner in Curron Borders, but they can pass with J.B., who has 695 yards, seven touchdowns and no interceptions.

He’s passed for 947 yards and 14 touchdowns, and the Rams are rolling.

The growing pains of a slow start won’t buckle this guy, who fires a nice ball and is learning on the fly.

No one credits his team more; coaches rave about his upside.

Waited his turn last season and has flourished, firing seven TDs with one pick.

Who’d we miss? Email jdavidson@sacbee.com with your thoughts.