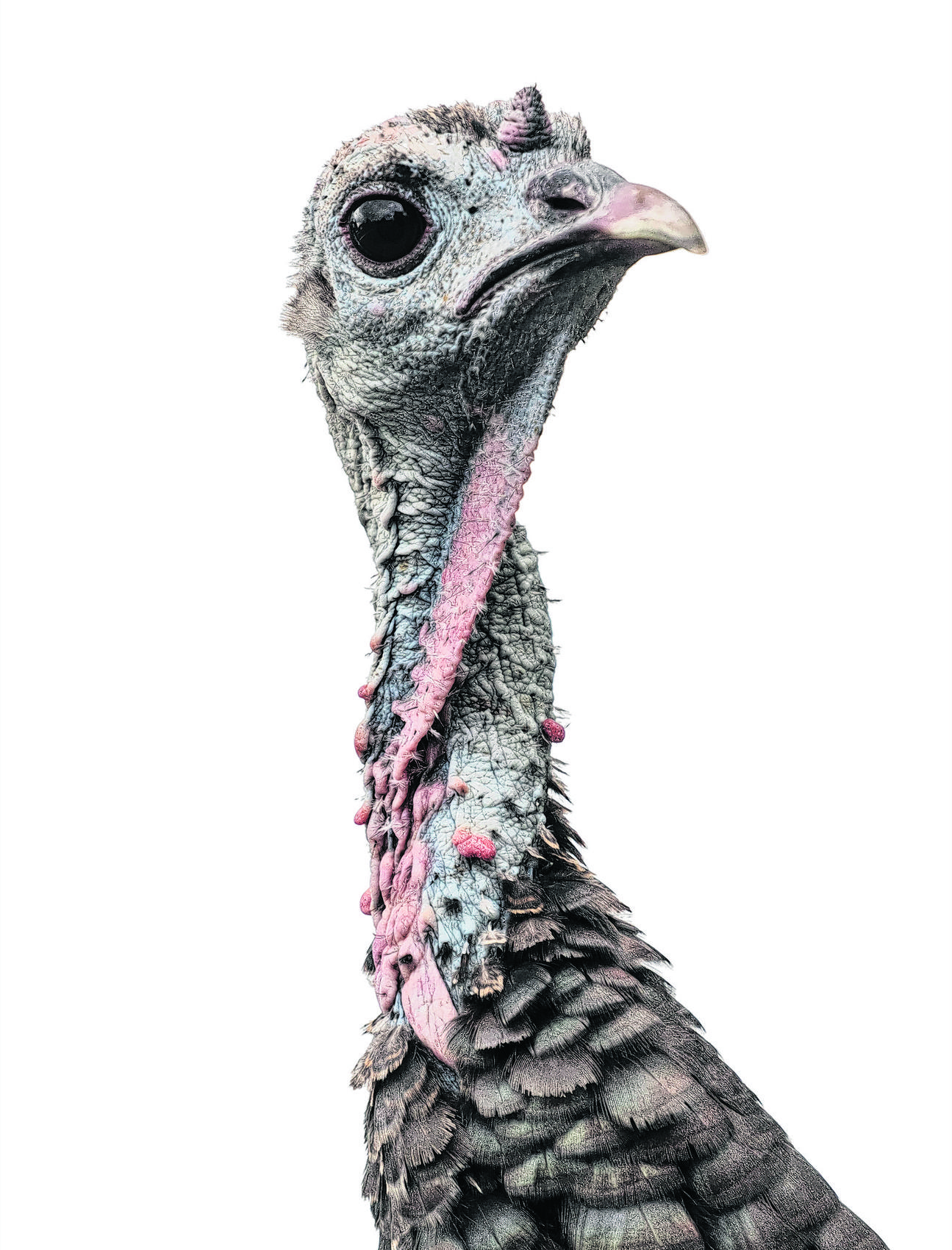 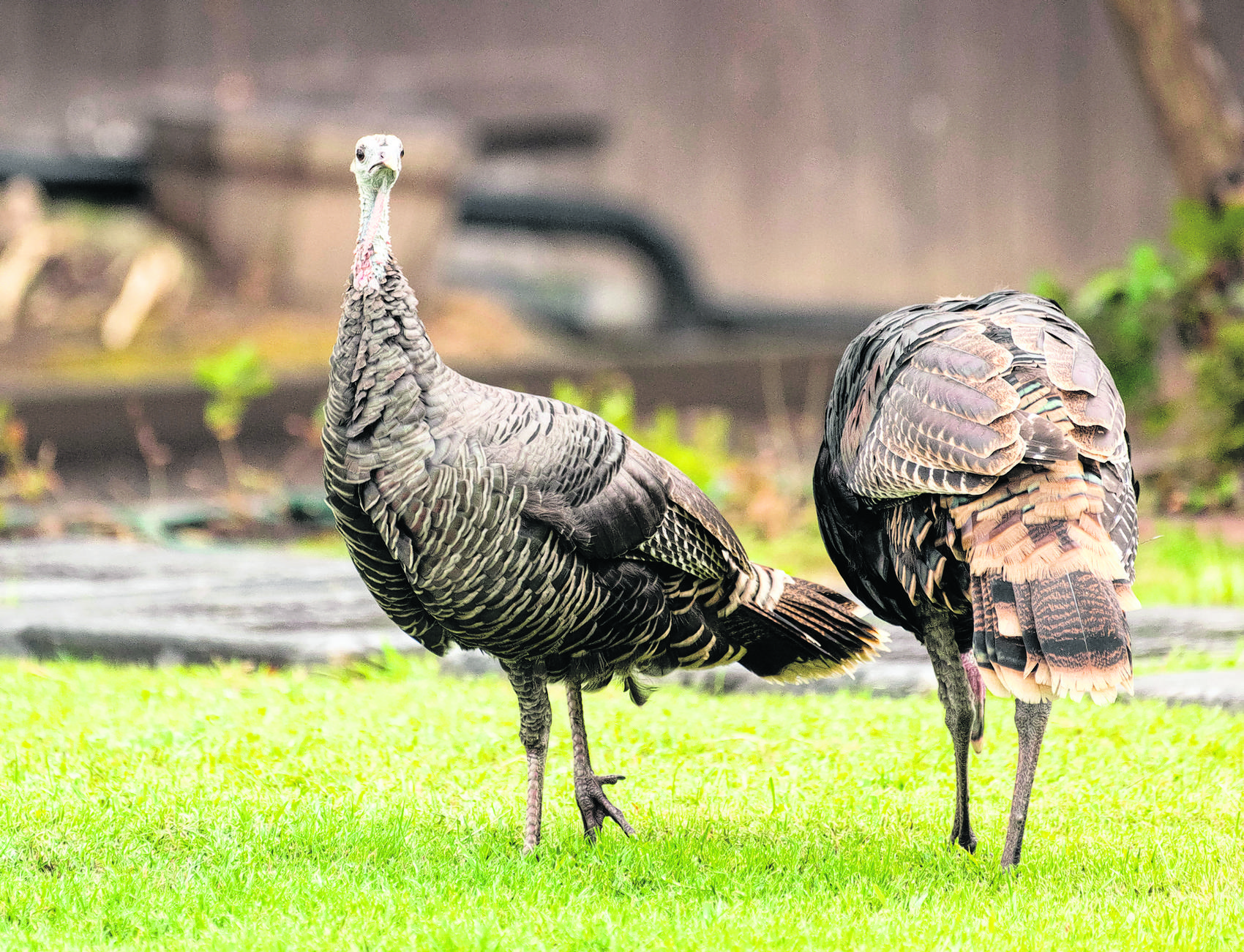 Turkeys forage in Arden Arcade in September. Residents have seen some of the aggressive turkeys wandering their neighborhood who some have been able to fend off with their dogs.

California Department of Fish and Wildlife

A pair of turkeys berate a postal worker as he prepares to drive his vehicle down a residential street in Arden Arcade in March. 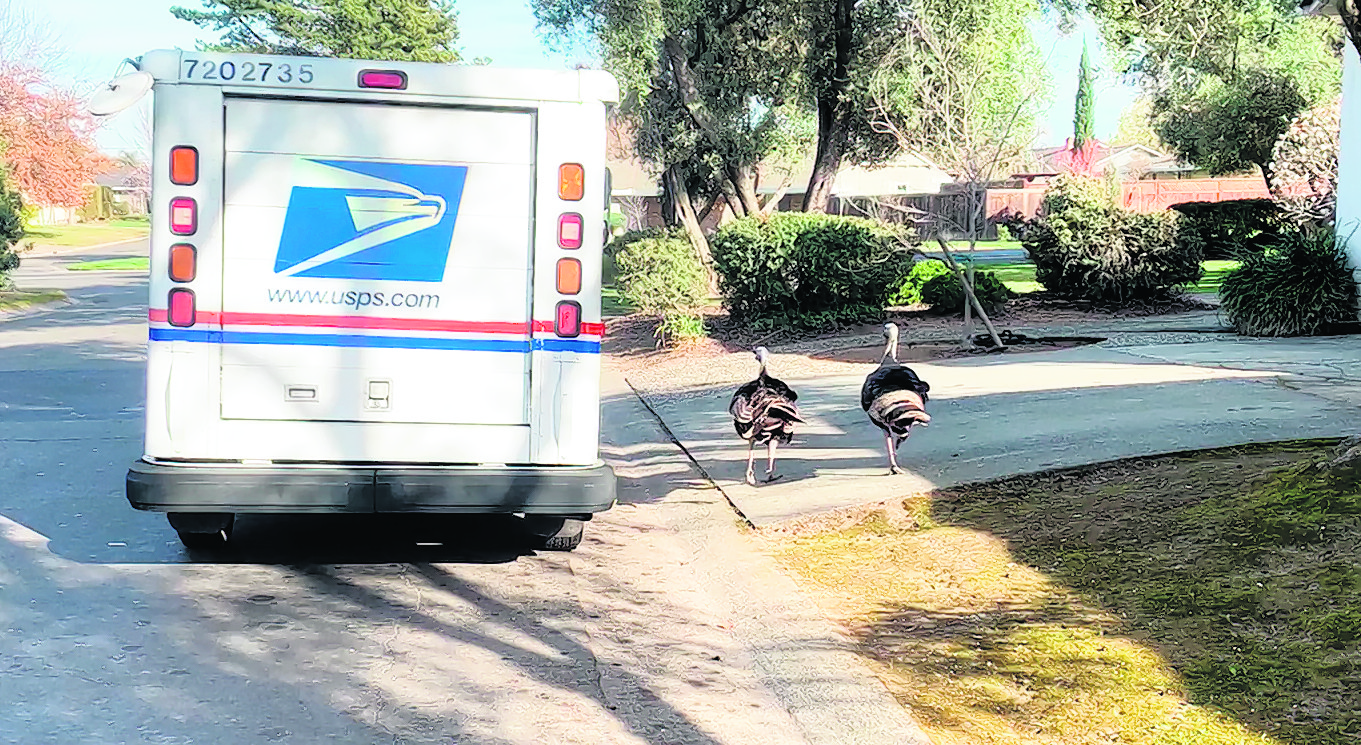 California Department of Fish and Wildlife

A pair of turkeys give chase to a postal vehicle driving a residential street in Arden Arcade in March.

When the tom turned up dead, there was some public hand-wringing about animal cruelty and possible criminal charges against the mail carrier who killed him. Behind closed doors, wildlife officials had already given the turkey a death sentence.

A monthslong conflict between several aggressive male turkeys and local mail carriers had ended in death Feb. 28 for one enormous bird after a postal worker beat him. Documents recently released by the California Department of Fish and Wildlife after a Public Records Act request reveal that officials spent months trying — and failing — to thwart this bloodbath.

Though the tensions have died down since the winter slaying, neighbors described the birds routinely terrorizing workers in their otherwise sleepy pocket of Arden Arcade.

Trina Gebert lives in the epicenter and has seen the birds chase mail carriers, Amazon drivers and garbage collectors.

“A whole gang of them,” she told The Bee. “I call them the drumstick gang.”

According to a Fish and Wildlife document titled “Aggressive Wild Turkeys in Sacramento – Repeated Aggression toward Postal Service Mail Carriers,” the agency “started receiving calls of aggressive turkeys that were threatening and interfering with mail delivery in October 2021.” Officials went with their go-to response: Don’t feed them; maybe try an open umbrella to dissuade them from approaching you.

It didn’t work, the document stated: “By mid-October it was evident that the birds were not responding to normal ‘shooing away’ and one of the mail carriers was injured on his hand.”

So the agency’s Human Wildlife Conflict team headed to the Sacramento County suburb. On Oct. 15, they staged “a reconnaissance operation.”

In a video shot by Capt. Patrick Foy March 2, released in response to The Bee’s records request, the Fish and Wildlife investigator witnessed the turkey aggression firsthand, continuing even after Feb. 28’s violent episode.

“It looks like we can walk right up to ’em, it’s just the mail carrier who they don’t like,” a wildlife officer says in one video. It also shows a man in a mail truck, who, like all postal service employees in the documents, is unnamed. In the video, another officer walks around the truck and the two male turkeys trot away, eager to avoid humans — unless the humans work for the U.S. Postal Service. In a second video, the turkeys chase the mail truck down the block, and the officer observes, “Yeah, they’re chasing him down.”

“It might be, I’ve got a lot of odors on me?” the mail carrier in the video offers. “Or the vibrations of the truck? I really don’t know what it is.”

On video, the turkeys started yelling at the mail carrier. The wildlife officer narrated: “They are obviously really upset, behaving very aggressively toward the mail carriers, but no one else.

After the reconnaissance operation, the Human Wildlife Conflict team got approval to kill two to four of the birds. According to the internal report, “both capture operations in late October and early December were unsuccessful as the birds ran away from staff.”

The state agency called in federal Wildlife Services agents from the U.S. Department of Agriculture’s Animal and Plant Health Inspection Service, and the turkeys evaded capture once again. The internal document says, “(Wildlife Services) Agent Steve Chandler searched for the birds on at least 2 occasions in early January but could not locate the offenders.”

The calls for help had died down throughout December and January. The calm was just an illusion: The conflict continued.

This fall, a former nurse emerged from her home in a lavender bathrobe to discuss the attack with The Bee. (She declined to be named in this story because she did not want to be known on her street as even more of a fusspot.)

The woman said that sometime before the turkey’s death in February, she witnessed a mail carrier brandishing a large pole at a turkey. An animal lover, she crossed her front yard to shout at him to never do that again.

But she thinks that the mail carrier may have made the tense situation with the birds worse.

Now in her 80s, she’s had multiple pet birds over her life, including a small bird named Sammy. As a child, her son hit Sammy once, and for the rest of his life, Sammy would attack the boy whenever he got the chance.

She thought about that when she saw the turkeys chasing the mail truck after the pole altercation.

“They were waiting for him,” she said. “Birds remember.”

On Feb. 28 around 2:30 p.m., blood was spilled on Morse Avenue. A mail carrier — possibly the same mail carrier witnessed by the woman in the lavender bathrobe apparently attempting to club a turkey — killed a bird in the street.

Capt. Patrick Foy, spokesperson for the California Department of Fish and Wildlife said at the time that someone in the neighborhood took the bird’s body inside and kept it for three days until officials responded to the incident. Almost immediately, an explosive thread on Nextdoor, a neighborhood networking app, laid bare deep divisions, with some calling for the mail carrier to be punished and others saying the turkeys were a menace.

The state Department of Fish and Wildlife responded.

“I know many of us (are busy),” wrote Christy Wurster, the assistant chief of CDFW’s Northern Enforcement District, in an internal email released to The Bee. Despite their packed schedules, at 2 p.m. on March 8, it was time, she said, to have a meeting about “the Sacramento County Turkey Incident.”

By then, the agency had already decided not to press charges against the mail carrier. In a separate email, with the subject line “Turkey Meeting,” Wurster wrote that they would have a group discussion “deciding whether the birds are removed or whether softer educational approach occurs first.” She asked CDFW Lieutenant Alan Gregory to brief the officials on the timeline of events.

Gregory wrote back, “I will be ready.”

When CDFW officials met to discuss the death, the document prepared by Gregory noted that “last week the situation escalated to a national media story when one of the mail carriers, feeling threatened, struck a male (tom) turkey with a stick resulting in the tom’s death.”

The immediate investigation into the death had led wildlife officials to a neighbor who was feeding the animals, a grave mistake; department officials told that resident “to cease feeding these birds.” Human Wildlife Conflict personnel planned to capture two to four birds and send them to El Dorado County. “Alternatively,” the document said, “we may be able to expediently authorize the lethal take” of several toms.

The agency’s plan was to run a sting operation, using postal workers “to draw the specific aggressive turkey into close proximity of (Human Wildlife Conflict’s) capture crew.” They would purchase a state-of-the-art talon net gun to catch them and send them to Ervin Ranch Wildlife Area, which was closed to the public and, perhaps more importantly, to mail carriers.

The federal Wildlife Services had already denied the agency’s request to help trap and release the birds, but killing them was still on the table.

After the operation was complete, CDFW would go door-to-door in the neighborhood, basically telling people not to feed the turkeys.

The whole story may never emerge.

Fish and Wildlife officials declined to release several of the records related to the turkey investigation. “The three withheld records are being withheld pursuant to Gov. Code 6254, subd. (f) as they reflect the analysis of the investigating officer,” wrote Emma Kennedy, an attorney at the agency who was referring, of course, to the officer who investigated and analyzed the death of a large bird.

The Bee has filed a Freedom of Information Act request with the U.S. Postal Service, which is still being processed.

Meanwhile, humans in the neighborhood have said they’re living in an uneasy truce with the surviving turkeys. The woman in the lavender bathrobe hasn’t witnessed turkeys chasing mail trucks in quite some time. And Gebert now just finds them amusing, especially the bird that sat on the fence right outside her bathroom window, staring inside (“a peeping tom”).

She can tell there are fewer turkeys running around than there used to be. They still seem to be angry at mail and package delivery workers, for reasons known only to them.